Sometimes, the most beautiful things happen when you least expect it. 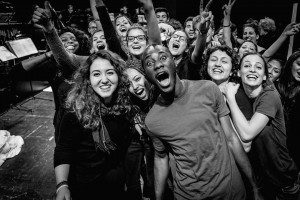 Who would have thought all of this would have started, back in October 2014, when twenty of us met and blended their voices to create the show La Terra delle Donne e degli Uomini integri (directed by Vincenzo Picone, screenplay by Francesco Camattini e music by Alessandro Sgobbio and Leonardo Morini). Perhaps none of us would have imagined that at the end of that show the magic of singing would have lingered between us, so strong, as well as the will to go on and dream about new projects. But so it was, and that group of young people, who had nothing in common but a past in the school choirs of our town and their director Leonardo, our Leo, decided to stick together and continue their adventure by creating a whole new choir: the Cor de’ Vocali ensemble.

From that moment on, we grew a lot, and we are now counting 29 members ranging from 17 to 29 years old. 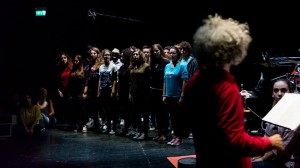 As time went on, we realized that , as long as the enthusiasm that brought our group together, we needed sacrifices, discipline and hard work. We were growing fast and we needed a lot of practice, but also rules and an official status. We wanted to be an independent association, we wanted our own regulation and location and the possibility to be active on our territory.

We then became the junior section of Quod Libet choir, also directed by Leonardo Morini, but when it ceased its activity we started our own path as a new and independent association, completely run by us.

Now, guided by director Leonardo Morini, (organist, composer and director of several choirs in Parma), we can express our passion for singing, exploring a wide and sophisticated repertoire, ranging from Renaissance and Baroque music, to Musical and a cappella versions of contemporary rock and pop songs.

Starting in 2014, we realised a long series of projects that made us really proud, starting with charity concerts: Cori e Cuori per la solidarietà (May 23rd, 2015), Concerto di Natale in favour of Associazione Famiglie SMA (December 19th, 2015), and Pensieri e Parole per Fa.Ce in favour of Famiglie Cerebrolesi Parma (March 19th, 2016). In summer 2016 we organized show in several villages located on the mountains near Parma, such as Trefiumi, Campora, Pietta and Folta.

In late September 2016, Compagnia Piccolo Sistina choir invited us to participate in our first choir festival in Castelnuovo ne’ Monti: it was such an exciting experience meeting great choirs such as Coro Giovanile Pistoiese and Coro Cantering, listening to their voices and singing together. It was a moment of sharing and growing for all of us.

Finally, we took special pride in contributing to two incredible projects: first, we were asked to create the anthem for the famous bicycle race La Polverosa, and we composed and recorded Strade Polverose. Lastly, the most unexpected project of all: the internationally known symphonic metal band Dark Lunacy asked us to be part of their latest work The rain after the snow, released in November 2016. Working with such professional and nice people was a honour and an inspiration for us.

We want to thank everyone of you: the ones who are reading our story, the ones who were there as it was happening, show after show, and the one who don’t know us yet. We hope to see you all in the public at our next concert!